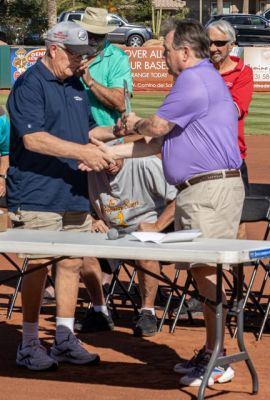 Rick and Sandy moved here from Chicago in 2000 and Rick became a member of the Club shortly afterwards. Rick was one of the real contributors to the early success of this Club. From helping and leading several tournament teams, to sharing a special passion for this game that was contagious to all who played with or against him.

In 2004, Rick led a committee which suggested changing the type of soil used on our field.  The benefits to all was immediate compared to the dirt we previously played on. Later that year Rick led the initiative of working with our Association and installing needed drainage in the right and left field corners of our field. Rick was the primary assistant to Coach Lou Gray during the first two years of the Lady Diamonds. Once we divided play into three Leagues, Rick served as assistant commissioner for the red league for several years. Rick displays teamwork and sportsmanship. Several years ago, the Blue league was experiencing injuries on the field.Rick assisted training players at each position in the infield to minimize those  accidents from re-occurring. Need a glove re-strung?  Rick is your man..  Trying to pay him anything for his troubles is another matter. He also led several batting clinics to assist all members so they might enjoy playing this game just a bit more. Never wanting to be a leader involved with running our Club, Rick has been a leader is so many other ways…. 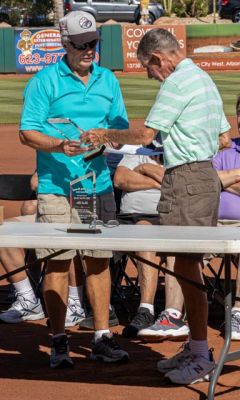 John’s better half is Karen, who is his support. John’s daughter, Kim, lives 4 houses from him. John is a veteran, with 3 years and 4 months in the Air Force. John has a brother Kevin who also plays softball. John has been member since 2007. John played baseball and football when in school and then played softball in bar leagues, but started playing seriously when he came to Sun City Grand. John has had 2 knee replacements, but that has not slowed him down. His nickname is still "Rocket".

John has always been active in SCG softball since joining the Club.  John has managed in the Red League. John has been assistant commissioner on Sat., Spring and for the Summer leagues. John has worked on the maintenance crew for many years. Whenever something needed to be done, just call John and he would be there to help get things done (siphon water from dugout or field, drag, mow, fix something etc. John would and could do it all). Something you may not know:  Larry Tolar, a past member, wrote a program to help with running the draft, make schedules etc.  John picked up the ball, learned the program and worked many hours to keep the program working until replacement software could be acquired. John helped with assessing new software and testing. John continues to stay involved in the operation and maintenace of this software.